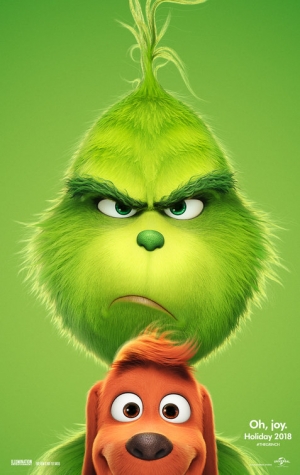 For their eighth fully animated feature, Illumination and Universal Pictures present The Grinch, based on Dr. Seuss' beloved holiday classic. The Grinch tells the story of a cynical grump who goes on a mission to steal Christmas, only to have his heart changed by a young girl's generous holiday spirit. Funny, heartwarming, and visually stunning, it's a universal story about the spirit of Christmas and the indomitable power of optimism. Academy Award® nominee Benedict Cumberbatch lends his voice to the infamous Grinch, who lives a solitary life inside a cave on Mt. Crumpet with only his loyal dog, Max, for company. With a cave rigged with inventions and contraptions for his day-to-day needs, the Grinch only sees his neighbors in Whoville when he runs out of food. Each year at Christmas they disrupt his tranquil solitude with their increasingly bigger, brighter, and louder celebrations. When the Whos declare they are going to make Christmas three times bigger this year, the Grinch ...

Trailer for The Grinch on TrailerAddict.