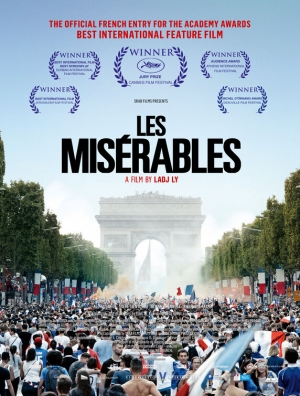 Les Misérables - Inspired by the 2005 riots in Paris.

Assigned to work alongside unethical police veterans Chris (Alexis Manenti) and Gwada (Djebril Zonga) in Paris' Anti-Crime Brigade, Brigadier Stéphane Ruiz (Damien Bonnard) - a recent transplant to the working-class suburb of Montfermeil, where Victor Hugo wrote his famous novel Les Misérables - struggles to establish a working relationship with influential community leaders while attempting to maintain some semblance of peace between his disreputable team and the citizens of the local housing projects. When what should be a simple arrest goes tragically awry, the three officers must individually reconcile with the aftermath of their actions while angling to keep the neighborhood from retaliating with mob violence. Beginning as a Cesar-winning short film, the film was inspired by the 2005 riots in Paris.